The comdirect group closed financial year 2018 with a pre-tax profit of €70.7m (previous year: €94.9m). The pre-tax return on equity stood at 11.3% (previous year: 15.8%). “We significantly increased our investments in growth and development while also achieving a reasonable result,” says comdirect bank AG CEO Arno Walter. “In the past year, we focussed on our core B2C business with the agreed sale of ebase. We also ramped up our investment activities and put ourselves in position to continue our strong performance going forward. This is reflected in the significant and sustainable growth of our customer base and assets under control, in addition to a wide range of new innovative services for our customers.” 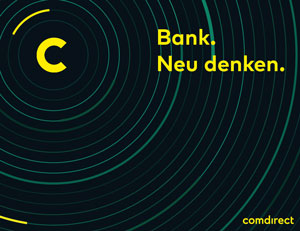 As a smart financial companion, comdirect focuses on the needs of an increasingly mobile and digital society when it develops new products and services. Banking and brokerage should be as quick, simple and convenient as possible. These services should fit neatly into the lives of our customers. Google Pay and Apple Pay are two examples of how this can be achieved. comdirect customers have been able to use both of them since they launched in Germany as a simple way to make secure payments using their phones. In addition, since December, new customers have benefited from a completely digital account opening process which allows them to open a custody account in minutes. comdirect was the first bank to integrate E-Ident into its app for this purpose. E-Ident is an innovative system which makes it possible to identify customers immediately using their ID card. Another example is the innovative comdirect app, which offers chat and voice transfers and is set to receive the German Design Award 2019. According to Walter, “comdirect has been one of the most innovative banks in Germany for years. That’s a trend that we want to see continue in 2019.” In reference to the new chat orders which are now available through the comdirect app (in iOS), Walter continued, “It makes buying shares as easy as using a messaging app. comdirect is the first provider of chat orders in the German market.”

The customer base in the core B2C business grew by 10% to 2.52m in 2018, an increase of 236k. This was more than double the customer growth recorded in the previous year. The net figure of new customers in 2017 was 103k (excluding the customers added as a result of the acquisition of onvista bank in 2017). The number of custody accounts has risen by 15% to 1.38m, while the number of current accounts has increased by 10% to 1.57m. Assets under control also increased by 5% to €62.1bn. While the deposit volume went up 16% to €25.4bn, the portfolio volume fell 1% to €36.6bn due to significant price losses on the securities markets. The negative market value effects (€–6.1bn) were almost entirely compensated for by the high level of net fund inflows to custody accounts (€5.7bn). According to Walter, “Total net fund inflows, i.e. the amount of new money our customers have entrusted us with, came to €9.2bn. That’s another all-time high.”

comdirect increased the income in its core B2C business by 4% to €334.3m (previous year: €320.6m). The main source of income is net commission income, which at €206.3m exceeded the previous year’s value (€194.2m) by 6%. The increase is primarily due to organic growth and the integration of onvista across the 2018 reporting period. At 21.9m, the number of B2C trades in 2018 was 27% above the previous year (17.2m). According to Walter, “We made a record number of trades once again. Our customers’ trading activity saw another significant uptick in the fourth quarter due to the high level of volatility on the stock exchanges. We are also very pleased with the consistent growth in the number of securities-based savings plans. We are seeing more and more customers use securities to play an active role in their asset accumulation.”

Net interest income after provisions for possible loan losses saw a significant 21% rise to €117.0m (previous year: €96.3m) despite the persistent zero-interest rate environment. This was in particular due to an increase in the deposit and credit volume. At €11.0m, other income was below the previous year’s figure of €30.1m, as expected. The previous year’s figure was influenced by a high result from financial investments.

Rise in administrative expenses due to growth investments

Administrative expenses in the core B2C business went up by 17% to €279.6m (previous year: €239.3m). This increase was primarily driven by higher other administrative expenses as a consequence of additional growth investments in new products, technological development and measures for attracting customers and increasing the amount of assets under control. It was also spurred by increased costs resulting from the integration of onvista across the entire 2018 reporting period, in addition to a rise in the mandatory contributions to deposit insurance schemes caused by the larger volume of deposits and a change to the assessment basis.

The pre-tax profit in the core B2C business came to €54.7m in 2018 (previous year: €81.2m). The discontinued activities (ebase) generated pre-tax profit of €16m (previous year: €13.6m). The sale of subsidiary ebase to the FNZ Group was agreed in July 2018 and remains subject to the approval of the supervisory authorities and fulfilment of contractually agreed closing conditions. The transaction is expected to be concluded in the first half of 2019.

The after-tax profit of the comdirect group amounts to €50.4m, compared with €71.5m in the previous year. The dividend to be proposed at the annual general meeting is 25 cents per share, as in the previous two years. This corresponds to a dividend ratio of around 70% (previous year: 49%). The remainder will be allocated to retained earnings to strengthen the equity base for continued growth.

Artificial intelligence will be deployed to a greater extent in the future to help comdirect continue to grow. One example is a hybrid chat bot which will greatly improve how quickly customer care agents can response to enquiries. An intelligent telephone-based dialogue system will automatically answer questions frequently asked by customers. Robotic process automation (RPA) allows standardized customer management processes to be handled quicker by the software itself, without human support. According to Walter, “Using AI will make us more efficient and enable us to scale our business model. It will also increase customer satisfaction by improving the customer experience and giving our employees more time to handle more complicated activities in contact with our customers. This will give us a good foundation for continued dynamic growth.”

comdirect is the banking partner of HSV Fußball AG

Growth is being driven by new products and marketing initiatives. The new brokerage interface (API) for the trading and analysis platforms of external partners, the com’on podcast covering the markets (with a constantly growing audience) and products like motif investing are strengthening comdirect’s position as the market leader in online brokerage. The innovation partnership with the German Volleyball Association (DVV) will be continued. The finanz-heldinnen initiative, which supports women on their way to financial independence, will be expanded. A new partnership with HSV Fußball AG will be launched in the first quarter 2019. In addition to facilitating cashless payments at all permanent shops at Hamburg’s Volksparkstadion, the partnership will also include a HSV fan account with innovative features like an armband for contactless payments in the HSV colours.

The full annual report for 2018 will be published on 26 March 2019. The figures stated in this press release are as yet unaudited.